Bringing you the power of film.

لمجتمعنا translated means “for our society” is a  human rights film festival in Kuwait in which members of the community will come together to create a space motivated by the power of film to ignite positive discussion on prevailing human rights issues in Kuwait, the Middle East and the rest of the world.

The film festival seeks to motivate awareness and to connect individuals to create a strong inclusive society, a society that cares and wants to see a better future for all, that is a community that comes together to work For all members of Our Society.

The film festival will include public screenings of thought-provoking human rights films followed by discussions, Q &A sessions and useful resources on how to become an active participant in civil society in addition resources for whoever is particularly interested in using film and documentaries as a tool for positive social transformation.

The film festival will be open to all, since we believe that each of us has the power to contribute in creating a better community. For specific dates, location, time and more please check below! 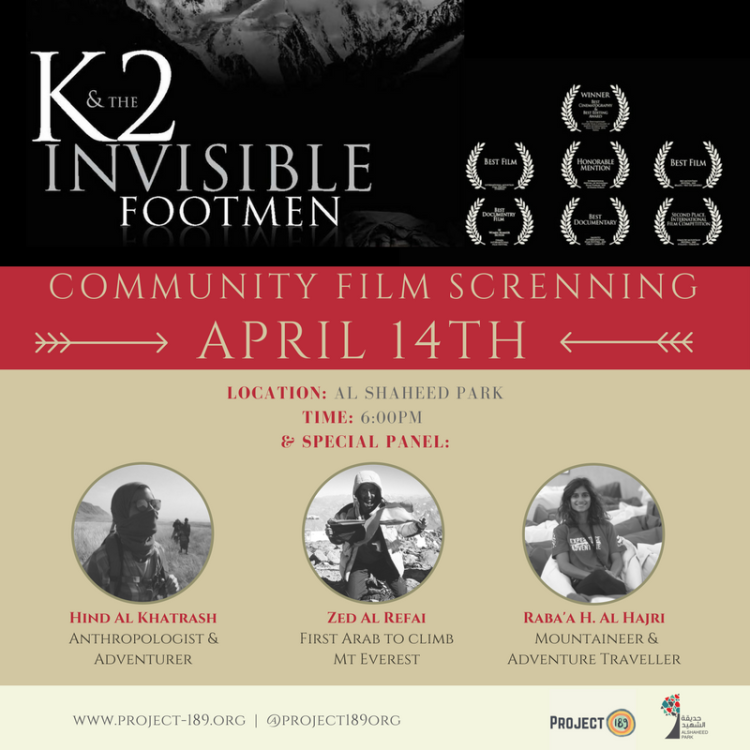 K2 AND THE INVISIBLE FOOTMEN

Located on the border between Pakistan and China, K2 is the second-highest mountain on Earth. For many climbers, it is an even greater prize than Everest, with limited routes, a steeper ascent, and a harder push to its summit. Nicknamed the ‘Savage Mountain,’ K2’s peak juts unprotected into the atmosphere, regularly exposing climbers and porters to life-threatening weather conditions.

Despite being paid at rates far below those received by international expedition leaders, such porters—whether they provide critical supplies to expedition base camps or take on higher-altitude tasks in support of ascending climbers—do some of the most difficult and dangerous work and these efforts make them worthy of recognition as the true heroes of mountaineering.

In K2 AND THE INVISIBLE FOOTMEN, filmmaker Iara Lee and team chronicle the lives of both Pakistani porters and Nepalese sherpas. The film also follows the first official all-Pakistani climbing team, made up of former porters, who successfully summited in 2014, in celebration of K2 60th anniversary. Amid breathtaking scenery, the film depicts the everyday sacrifices of porters and the courage of those indigenous climbers who choose to return to scale K2 in spite of past tragedies. In their striving to perfect their craft, these mountaineers provide a fresh look into the cultures and national traditions of Pakistan, a country typically portrayed in the foreign media as merely a land of conflict and sectarian strife.

Iara Lee, a Brazilian of Korean descent, is an activist, filmmaker, and director of the Cultures of Resistance Network, an organization that promotes global solidarity, supports efforts to secure peace and social justice, and brings together change-makers from around the world.

The work of the Cultures of Resistance Network falls into five program areas. “Make Art Not War” centers on collaborating with innovative artists working to unleash the power of sound and image. “Sustainability Not War” supports groups focused on ecology and promoting healthy food and a healthy planet. “Human Rights Not War” advocates for organizations increasing legal justice for all worldwide. “Education Not War” creates educational opportunities for under-served populations of all ages. And our “Urgent Action” area connects concerned citizens to social justice campaigns, addressing issues such as indigenous rights, self-determination, environmental issues, and more.

As a filmmaker, Iara has released several full-length documentaries and dozens of short films over the past decade. Her current project is a documentary entitled BURKINABÉ RISING, which showcases creative nonviolent resistance in Burkina Faso, a land-locked country in West Africa. Since a popular insurrection in 2014 overthrew a despotic president who had been governing the country for twenty-seven years, the Burkinabé spirit of resistance has been mightier than ever, permeating every aspect of daily life. The film is scheduled for release in 2017.

In 2015, Iara completed two new documentaries: K2 AND THE INVISIBLE FOOTMEN, shot in stunning northern Pakistan, chronicles the plight of the indigenous porters of majestic K2, the earth’s second-highest peak. LIFE IS WAITING: Referendum and Resistance in Western Sahara looks at forty years of Moroccan occupation and the Sahrawi nonviolent struggle for self-determination by a people for whom colonialism has never ended. In 2013, Iara made a short film titled THE KALASHA AND THE CRESCENT, which chronicles how this indigenous minority in northern Pakistan responded to the challenges facing their culture. In 2012, she released a documentary called THE SUFFERING GRASSES: when elephants fight, it is the grass that suffers, which examines the Syrian conflict through the humanity of the civilians who have been killed, abused, and displaced to the squalor of refugee camps. In 2010, she released the feature-length documentary CULTURES OF RESISTANCE, which explores how creative action contributes to conflict prevention and resolution.

In May 2010, Iara was a passenger on the MV Mavi Marmara, a vessel in the Gaza Freedom Flotilla that was attacked in international waters by the Israeli navy, leading to the murder of nine humanitarian aid workers. Among the many people who recorded the events on that ship, her crew was the only one to successfully hide and retain most of the raid footage, which she later released to the world after a screening at the United Nations. Iara is dedicated to the support of Palestinian civilians who have been victims of war crimes committed by the Israeli military and who suffer from the Israeli government’s ongoing acts of collective punishment.

At the onset of the Iraq war in 2003, Iara decided to live in the MENA region (Middle East & North Africa) in order to understand the conflict from that perspective. While residing in Lebanon in 2006, she experienced firsthand the 34-day Israeli bombardment of that country. Moved by that experience, she has since dedicated herself to the pursuit of a just peace in the region, and she is an enthusiastic supporter of those initiatives which strengthen adherence to international law. In 2008, Iara lived in Iran and supported a number of cultural exchange projects with the goal of promoting arts and culture for global solidarity.

From 1984 to 1989, Iara was the producer of the Sao Paulo International Film Festival in Brazil. From 1989 to 2003, she was based in New York City, where she ran the mixed-media company Caipirinha Productions, created to explore the synergy of different art forms, such as film, music, architecture, and poetry. Under that banner, Iara directed short and feature-length documentaries including Synthetic Pleasures, Modulations, Architettura, and Beneath the Borqa.

Iara is a long-time supporter of Greenpeace, Doctors Without Borders, Amnesty International, and many organizations around the world. Through the Cultures of Resistance Network, she connects and collaborates with activists, agitators, educators, artists, and farmers to build a more just and peaceful world through creative resistance and nonviolent action!